The UK’s largest recruitment event of the year will be held on Thursday 23 September 2021 at JW Marriott, Grosvenor House on Park Lane. A glittering gala dinner will recognise and reward best practice and success in the industry.
The evening will commence with a dazzling drinks reception, followed by a stunning three-course evening meal, followed by entertainment from our host, Joel Dommett, the award ceremony itself and after dinner entertainment. The awards are the perfect opportunity for guests to let your hair down and to celebrate with friends, colleagues and peers.
The Great Room at London’s JW Marriott, Grosvenor House is the perfect setting to welcome the leading lights from across the industry, networking together and rewarding individual and company success.

We can’t wait to meet in person on the 23 September for the Recruiter Awards 2021 at JW Marriott Grosvenor House London. We will continue to monitor Government guidance on live events and ensure we have the necessary procedures in place if needed in September.

We want you to feel totally confident about booking a seat or table at the Recruiter Awards. If we need to reschedule the event, we will simply roll over your booking to the new date or the following year’s event and if you are unable to attend the rearranged dates, you will be entitled to a full refund. View the full terms and conditions of booking here

Connect with us on Twitter @RecruiterAwards
More information on the table packages available can be found below.
To book your table at the awards please click here.

– Access to the headline sponsor and Recruiter VIP reception
– Guaranteed table in the first two rows along with Recruiter journalists, awards judges and industry VIP’s
– Enhanced listing on the table plan
– Stunning three course dinner
– Awards ceremony
– Two buckets of beer or five bottles of wine
– After dinner liqueurs
– Photo of your table (emailed after the event)
– PDF version of the guest directory sent 2 days before the event to enable you to network more effectively

Standard half table of 5 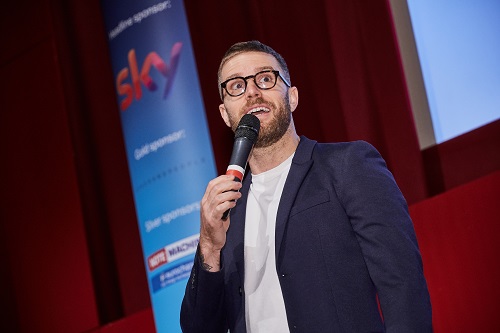 Joel Dommett is a comedian, actor and television presenter. His career has taken him from comedy clubs to ITV’s Australian jungle and a variety of panel show and guest appearances. Starting out performing standup around the world, Joel’s TV break came writing and presenting news on MTV.

As a host he went on to front Live in Chelsea (the after-show programme to Made in Chelsea) and BBC Three’s Impractical Jokers. An ‘excellent storytelling comic’ according to The Guardian, Joel has performed acclaimed shows at the Edinburgh and Melbourne comedy festivals.

He has also appeared on a number of panel shows, and as a guest on the likes of Britain’s Got More Talent, Drunk History, Live at the Apollo, 8 Out of 10 Cats, Love Island: Aftersun, Celebrity Juice, and Russell Howard’s Good News.

Famously Joel finished a close second place in I’m a Celebrity…Get Me Out of Here before then hosting the spin-off Extra Camp show alongside winner Scarlett Moffat. He’s also competed in a celebrity edition of the quiz show The Chase and taken on a number of dramatic and comedy acting roles on film and TV from Casualty to Skins.

Away from the screen he’s also the author of the bestselling book It’s Not Me, It’s Them: Confessions of a hopeless modern romantic

Click here to book your table for the 2021 Recruiter Awards.

Take a look at the 2020 Recruiter Awards, which was a virtual ceremony:

Take a look at the highlights from the Recruiter Awards 2019:

Take a peak at the highlights from the Recruiter Awards 2018: