RECRUITMENT INDUSTRY ENTREPRENEUR OF THE YEAR 2018 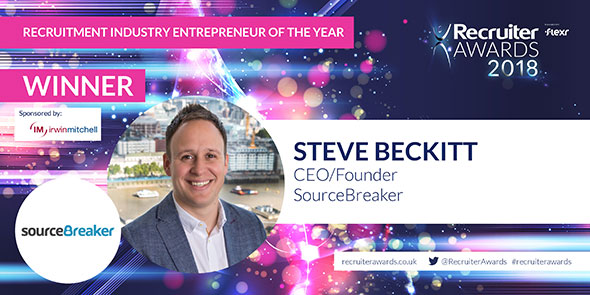 Steve Beckitt created a new category of recruitment product – end-to-end search, with his application finding recruiters’ candidates, leads and decision makers all in one system. The desired outcomes were to change the way recruiters search, helping them make better matches between candidates and vacancies and do it faster, and to drive improvements in standards across the industry, with easy-to-use technology. Between October 2016 and October 2017, SourceBreaker brought in more than 250 customers in 18 months, along with seven-figure revenues. Beckitt embedded a culture of promoting from within and allowing those promoted to innovate in running their team. He provides external mentors to help new managers develop, and every staff member has had external training or qualifications funded by the company. The entire leadership team has worked their way up into their roles – since launch, no one has been hired in above existing staff.

• In just 18 months since Beckitt started selling SourceBreaker, it is now serving more than 4,000 users across 280 agencies worldwide.

• SourceBreaker has also innovated in the selling and onboarding areas – such as the three-month break clause for new customers to limit their risk, and the high-touch implementation and training process.

• The platform has now started to change the standards within the industry. High-performing recruitment companies now ask other suppliers to follow the SourceBreaker onboarding and training processes, as they have yielded such strong results.

“Steve exudes energy, enthusiasm and innovation…. He has quickly moved the business to a revenue-generating model.”