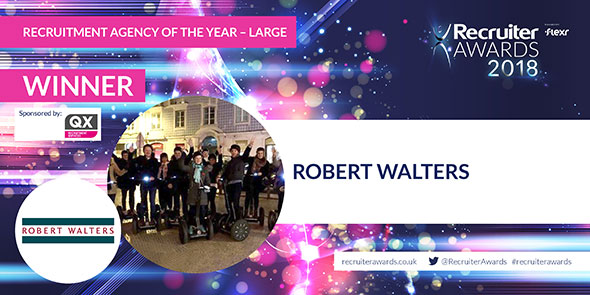 Robert Walters is a specialist professional recruitment consultancy operating across 28 countries and employing more than 3,700 people. It experienced a record-breaking financial year, with high profit growth and an expanded marketshare. In a year-on-year comparison, the firm saw revenue grow by 23%, net fee income by 19%, operating profit by 13% and profit before taxation by 25%. During 2017, it operated an effective social media strategy, being named as one of the top three most socially engaged recruiters on LinkedIn, and increasing its follower numbers by 13% in the UK and 14% globally. It also created a dedicated innovation team to explore technology innovation, as well as being involved in several business partnerships, and in initiatives generated by its corporate social responsibility and sustainability strategy.

• In the firm’s most recent full-year financial results, it reported a 9% increase in terms of productivity, with an average of £133.7k generated by each fee-earner.

• Recent activity by the innovation team includes: an artificial intelligence sourcing project with US-based AI firm Arya; investment in data-led sourcing technologies; and use of technology to support meritocratic recruitment.

• Business partnership activities during the year included sponsorship of the British and Irish Lions rugby union tour of New Zealand, which involved creating branded content and an online contest to win a trip for two to New Zealand to watch the Lions play.

• CSR and sustainability activities during the year included: holding a global charity day which raised more than £32k in the UK alone; and becoming a corporate partner of charity Global Angels, which works with disadvantaged communities around the world.