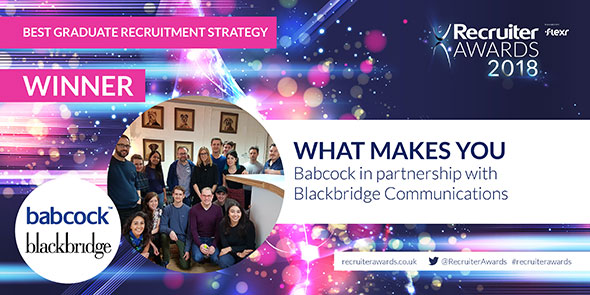 Winner: What Makes You: Babcock in partnership with Blackbridge Communications

With its 2017-18 graduate attraction campaign, Babcock International Group needed a strategy that would provide a strong pipeline of candidates across both its engineering and its business management programmes. The engineering services organisation had an ageing workforce, so it focused on engaging with a broader range of candidates to attract new talent into the business at an early stage. Working with its marketing agency partner Blackbridge Communications, Babcock launched the ‘What Makes You’ campaign in September 2017, which made individual graduates the heroes. The new campaign’s segmented use of double-exposure photography allowed the materials to celebrate the diversity of personalities, professional and personal interests, and the ‘Being Babcock’ values that make up each graduate.

• The fresh approach called for a creative reinvention of the company’s five key channels: website, print, video, social media and on-campus presence. Campaign content focused on personable and engaging stories about Babcock’s people, principles and projects. Blackbridge filmed fun interviews and used video clips of graduates to create profile films specific to each of their roles.

• The campaign has allowed it to engage people with the right candidate profile to go on to have a successful career at Babcock. A much more targeted media strategy has seen the company receive fewer applications, but of a much higher quality, allowing the company to consistently fill more roles week-on-week than in previous years.

• The new recruitment messaging has been effective on Babock’s social media channels, and this has enabled it to extend its reach beyond its main target universities.

• The ‘What Makes You’ concept has been crucial to the success of Babcock’s graduate recruitment. It has built employer brand equity, rising in the ranks in the Guardian UK 300 from 155 to 134.

Beat the Game Changers: Vodafone in partnership with Pink Squid

”This was a compelling proposition that sent a powerful message. It succeeded in demystifying the engineering sector… by breaking through stereotypes associated with engineering.”