RECRUITMENT INDUSTRY ENTREPRENEUR OF THE YEAR 2019 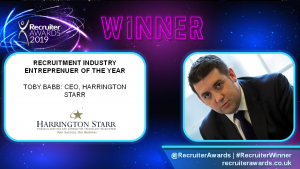 The winner illustrated a real advocacy and promotion of the recruitment industry within his client space with the creation of thought leadership channels both print and digital.

Judges’ comments: “He has elevated the perception of recruitment within his marketplace and collaborated widely with both big corporates and start-ups.”