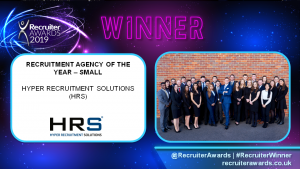 Life sciences recruitment specialist Hyper Recruitment Solutions (HRS) was built on a vision of “providing recruitment solutions which change lives”, helping people with careers that have an outstanding impact on science and technology.

Judges’ comments: “The quality of the submission provided a comprehensive insight into its operation and how a small company grows and engage its employees, whilst positioning itself in the market.”