WINNER: The AA Ready for ANYTHING? Challenge: The AA in partnership with PeopleScout 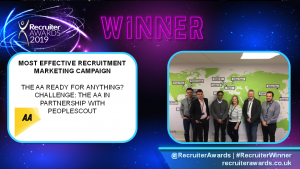 In a category where expectations are high, the shortlisted companies stood out ahead of others for their professionalism and depth. Although the judges were surprised by the gulf in quality between those making the shortlist and those not, there was no question that the winner’s commitment to innovation – delivered in a cohesive way – made it impossible to ignore as the leading entry.

Judges’ comments: “There was a clear winner in this category with a stand-out campaign with innovative content that was joined up. The judges commented that they would have been proud to have come up with this creation and were highly impressed with the quality delivered.”