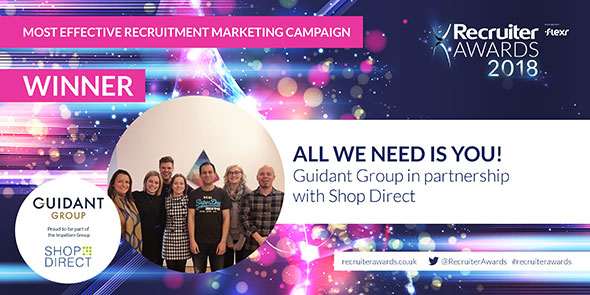 Winner: All we need is you!: Guidant Group in partnership with Shop Direct

Recruitment outsourcing provider Guidant Group has a tailored managed service partnership with digital retailer Shop Direct, fulfilling the retailer’s requirements for temporary warehouse staff across all its fulfilment centres. To support peak hiring, Guidant’s internal recruitment marketing team worked directly with its on-site team and Shop Direct to deliver a cost-effective and innovative candidate attraction campaign. Guidant’s campaign was underpinned by a well-researched, planned and executed recruitment marketing strategy. It targeted specific types of workers, and challenged perceptions that warehouse work was not really for women. Guidant successfully recruited more than 1,500 temporary warehouse operatives for the peak period. The budget for the entire campaign was just £15k, making the average cost per hire £10 (based on the 1,500 recruited during the peak period).

• Guidant met key stakeholders at Shop Direct to discuss the importance of the retailer’s reputation in the local candidate market, hiring trends and the main benefits of working at Shop Direct. These became a core focus of Guidant’s strategy and helped to form its campaign, ‘All we need is you!’.

• The company focused on four key personas – Daytime Dave, Weekend Wasim, Night Shift Nick and a new target demographic, Female Farah – and what would appeal to them in terms of pay and monetary benefits, work environment, random acts of kindness within the workplace, and a strong charity culture.

• Guidant based its campaign theme on real workers at Shop Direct, to help candidates relate – as well as be able to imagine themselves working within the team in a warehouse environment.

• Guidant’s in-house design and copywriting teams worked closely with the marketing team and Shop Direct stakeholders to come up with concepts for creative across all chosen media platforms, and accompanying engaging job advert copy.

• The Female Farah persona proved a success, as 69% of all female hires occurred during the period Guidant’s candidate attraction campaign was live. In addition, it has also further developed diversity within the workplace.

“This was an extremely well researched campaign – we loved the use of personas. It won, though, because of its stand-out cost-per-hire and other impressive metrics.”