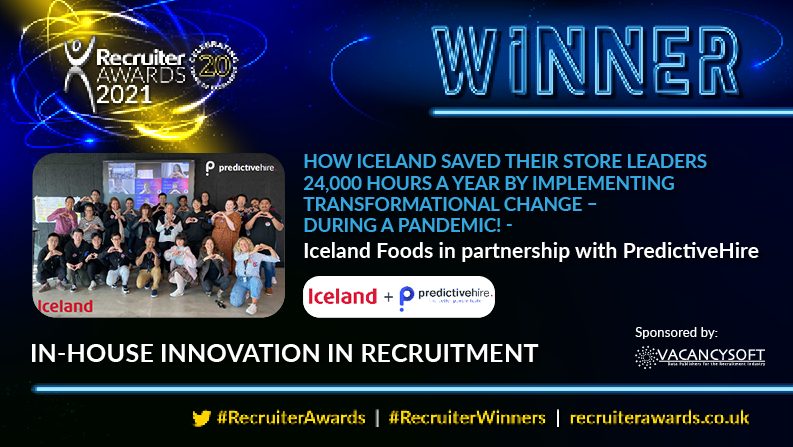 How Iceland saved their store leaders 24,000 hours a year by implementing transformational change – during a pandemic – Iceland Foods in partnership with PredictiveHire.

Automation was critical to increase the time store managers had to trade their stores. Frozen food specialist Iceland receives a high volume of applicants – more than 120,000 per month – and faced a crisis in 2020: increased trade and Covid-19 absence meant that surge hiring needed to be automated, without losing the personal touch. It had to be a simple solution that store managers would understand quickly and trust and used screening tools that candidates would also trust.

Judges’ comments: “Their simple, straightforward submission ticked every box by demonstrating the contribution the recruitment function played to the success of their overall business. They also clearly demonstrated thoughtful consideration to the fact that many candidates would be applying for jobs at Iceland following the decimation of their previous career paths, for example, aviation industry employees.”

Also: The judges noted that this was yet another strong category that shows how strong technical integration can lead to quantifiable results.