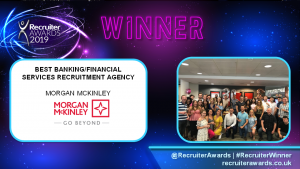 The Morgan McKinley Group is a global recruitment consultancy, established in 1988, which is synonymous with the banking and financial services sector. Having initially built its reputation in the Square Mile, the recruiter has since been able to recruit into international banking locations including Dublin, Toronto, Singapore, Hong Kong, Shanghai, Tokyo and Sydney.

Judges’ comments: “Delivered excellent results in tough and challenging market conditions with the finance industry and Brexit. Morgan McKinley provides a high quality of service at all levels of the business, driven by great leaders who demonstrate and drive great values and culture.”